It took me a long time to understand how such a tiny thing could catch such big fish.

When I first started reading about fly fishing in BC’s Southern Interior, which was not long after I started fly fishing, it felt like all I read about was chironomids. I read about how they’re the main food of the rainbow trout for the first month or so after ice off, I read the statistics about just how much they eat them, I read about guys like Brian Chan and John Kent, I read about people who seemed to have buckets of the little things that they carried around with them. Even my wife came back from one her fly tying classes talking about them and rattling off the stats of how effective they were. There was no escaping them.

I didn’t get it. I mean, I understood the method, it just didn’t appeal to me. The presentation sounded very specific, as did the techniques for retrieving. Far too nit-picky for my tastes and, when you add to that the fact that I’ve never been a fan of just staring at an indicator of any kind and I just wasn’t interested. Not in any serious way.

What I couldn’t do was ignore the fact that no matter how much I wasn’t into the idea of using chironomids, they caught fish. Folks talked about the double digit days of 20 plus inch fish like it was expected to happen as soon as you dropped a chironnie into the water. So I picked some up and played around with them a little bit. I didn’t have much luck and I certainly wasn’t a fan of having a long leader. Even my first trip out during the peak of the season—a fantastic day of fishing with some friends—wasn’t quite enough to convince me that they were the way to go.

The year ended with me not totally sold on the experience, but still kind of looking 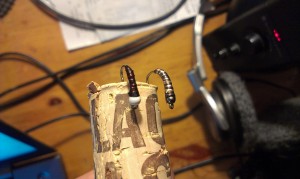 The first two flies I tied myself. The one on the right has caught many fish.

forward to the next season. Over the winter, instead of spending most of my time reading about fishing, I was able to meet up with some folks thanks to a local fly tying group. Most of them were big time chironomid fishers and that was pretty much all they tied at these get togethers, and, with their help, I wound up learning how to tie them.

I’m not sure if it was the magic of having tied the flies myself, or what, but when I was able to start getting out on the water again, I seemed to be catching more fish. I was catching fish on the chironomids I tied myself anytime I tossed one overboard, whether I ready to catch a fish or simply dealing with a tangle.

The moment it all changed for me, though, happened on a day when I was going out fishing with my little girl in tow. She was seven or so months old at the time and I jokingly told a friend today’s trip was two hours of getting ready for 45 minutes of fishing.

At first, I thought the day was going to a total write-off. The wind was blowing hard and my little canoe was being thrown around that lake like I didn’t even have an anchor in the water, which I did. The only cast I managed to make resulted in a lost fly. I was getting kind of grumpy and decided that it was time to change spots before my wife had two babies in a boat to deal with. We paddled off to a calmer part of the lake, tied up to a deadhead and I tied on another fly that I had tied, adjusted the depth of the indicator and cast.

In almost no time at all, my indicator went down and, after a brief, but intense, fight, I landed the nicest trout I’d ever caught on a fly rod.

“Not bad,” I thought to myself.

Caught on a chironomid.

Two casts later, the indicator went down again. Another intense fight, mostly diving with not much in the way of jumping, and again, I was looking the best fish I’d ever caught on a fly rod—the first fish had been bumped down to second best.

Another couple of casts and, again, my indicator went down and I was again locked in a fight with a beautiful rainbow.

I was impressed. Between the wind and a baby who still wasn’t sure how she felt about boats, I hadn’t expected anything from the day at all.

Not long after the third fish, we had to call it a day. Nap time was coming up for the little one and us adults were getting hungry. I had been on the water slightly longer than 45 minutes, but the fishing had been better than I could have possibly imagined. Score one for chironomids.

The chironomid season wrapped up, at least for me, at the end of May and, by some crazy coincidence, I managed to visit the the exact same lake on the exact same day I’d first gone out there last year. I was looking forward to trying out a new anchor that I had and also to getting into some fish. The action was even better than it had been the year before. I had six or seven fish to the boat in about two hours and lost a few more. Had I been able to spend the day out there, I can only imagine how many I would have caught.

Some fun with a little rainbow on chironomids. This was right around the time I was figuring it all out.

I left the water that day with a changed perspective on chironomid fishing. There are still aspects of it that aren’t quite for me—I still don’t like indicators and I struggle non-stop with long leaders—but I’ll have to admit, when it comes to making a day spending a day on the water, throwing out a chironomid or two one way to make things that much more exciting.

Now, if you’ll excuse me, the water calls.

2 thoughts on “Converted to Chironomids”