When the water calls, little else seems to matter. Everything but the tasks that are absolutely essential to survival start to have less and less priority as the desire to get out there grows and grows, until the only thing you can do is just pack up the boat and hit the water. This is probably the first time in my life something has really called to me the way the water has lately. I grew up in pretty rural areas and, even when we lived in cities, we still spent all our time around water, but it wasn’t until lately that the call of the water has become something that required an answer. 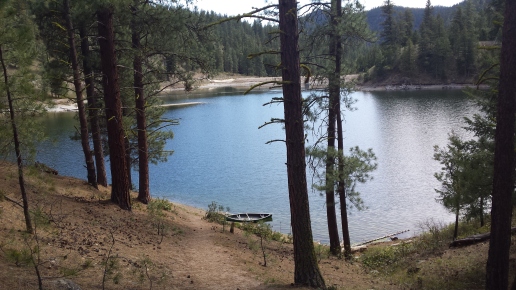 Back in February I was all ready to go with a post a week for four weeks. The posts were drafted, the ideas were there, heck most of them had already been written, at least partially, in my head long before I had even thought about the post a week idea. Then, as tends to happen here in the South Okanagan, the weather turned from kinda wintery, to very spring-like. All the anglers I know started to get itchy. Reports were popping up that talked about how much ice was left on which lake and which would be ice-free first and everyone was getting a major case of the shack nasties, myself included. I had no choice but to focus on the things that mattered: work, because it had gotten busy, and family, since 1 year olds don’t look after themselves. 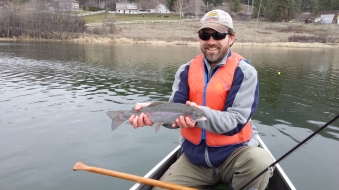 water more with the my dad–I’ll have more to say about that in another post–and, even better, I started catching fish. Some nice fish, actually. Among the biggest I’ve caught in B.C. and definitely the biggest rainbows I’ve caught on a fly rod. It was a great spring and it’s hard to sit in front of the keyboard and write about fishing, when you could be out there actually fishing.

Things haven’t really slowed down all that much, but they’ve settled into a nice groove. One that involves all the necessary things, like work and family, and even allows for a little bit of the fun stuff, like fishing and camping.

As I mentioned above, I’ve had a pretty good spring for fishing and one of the things that is extra nice about it is that, along my usual solo trips, I’ve been making it out with my
family more. Those trips are always hectic, there’s a lot of extra planning with only a
minimal amount of fishing involved, but they’re fantastic. At some point along the way, without any real coaching on the matter, my little girl has bec

ome really obsessed with fishing and boats. It’s great because I know that one way to guarantee she’s going to have a great day is to pack everyone into the car, make some sandwiches and find lake–as easy as I might make it sound, it sometimes takes longer to leave the driveway than it does to get to the lake, but it’s always worth the effort.

Throughout it all, I felt the shame of not updating as I’d promised, but I don’t regret the way I used my time. It’s hard to have any regrets at all when the water calls.