[This is the first in a series of posts about somewhat unconventional advice for becoming a better angler. It’s not tips, tricks or tactics, as such, but suggestions for becoming an overall better angler that you might not otherwise think of.]

A little over a year ago I did something I don’t normally do: I went out to meet with a group of strangers I don’t know. I tend to steer clear of situations like this because I typically
don’t enjoy them, especially there’s something going on that I don’t know much about. I usually don’t find things like that very enjoyable, no matter how much I might interested in the subject. In this instance, a fly tying group had just started up in my town and, since I’m pretty keen to learn as much about fly fishing as possible, I thought, “What the hell? Worst case scenario, I have a beer and go home.” As it happened, I found myself sitting next to a guy who teaches classes on fly tying, among others, while being walked through the tying of my first fly. It wound up being a great night.

Not long after that, I was talked into checking out a couple of meetings of the local fly fishing club by some of the guys at the tying nights and I was attending regular club meetings. 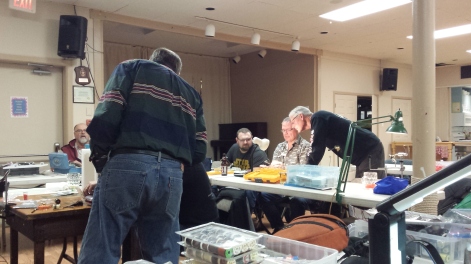 These may seem like two fairly unrelated events and not really worthy of talking about, but, as I mentioned, one of the guys at the tying night just happened to be a fly tying instructor and something of an expert at certain styles of fishing and, not only that, but the fly fishing club has 50-some odd members with probably 1,000 years experience between them all and they were all perfectly willing to share whatever information they might have about just about any aspect of fly fishing in this area, not to mention all the educational events the club puts on, like casting clinics and fly tying nights. In fact, it wasn’t long at all before I was regularly chatting with some of these guys about various lakes in the area, how to get there, what was successful, things about different techniques that are out there–casting styles or fishing with chironomids, for example. I wasn’t pestering them with questions by any means, simply asking them as they related to whatever we happened to be talking about at that time.

I had figured that I might pick up a thing or two attending the tying nights, but I hadn’t anticipated the amount of knowledge that would be floating around at these things. As a guy who didn’t have a lot of knowledge about the local fishery, or even fly fishing period for that matter, I suddenly found myself learning all the time and I couldn’t have been happier.

That I didn’t have to be on the water to learn how to fish was a very novel concept to me, I mean outside of just spending all my time holed up in my office reading online forums and watching You Tube videos. Meeting new people opened a wonderful new world of learning that I hadn’t realized existed.

However, if you’re not in an area where there are tying nights of fishing clubs, all is not lost. You can also get involved in online discussions and learn just as much. The internet is full of online forums that are related to fishing and, of course, there’s also Facebook. Love it or hate it, Facebook is full of people who love to share information about fishing and there are fishing groups for every area you can think of. Heck, there are at least a half-dozen here in the Okanagan and even with the overlap in membership, that’s a lot of people who love fishing.

In both instances, in person or online, it helps if you’re an active member of the community, not just someone who sponges up information and then leaves. When you’re online, take a bit of time to answer any questions that you can. You don’t have to give away all the good stuff that you worked hard to learn, but the occasional tidbit of information will go a long way to getting your questions answered. Being an active member of groups in your community not only means you’re going to get to know the guys who help out better, but you’re also going to learn a tonne of information about your local fishery and I mean a TONNE. The amount of work done by the Penticton Flyfishers is amazing. They run a local hatchery, they monitor certain lakes in the winter to make sure things like aerators are still working, they’re very active with government groups, like the folks who stock the lakes, and are even involved in discussions regarding regulation changes. I haven’t had much time to get involved in stuff like that, yet, but what I do have time for is editing the newsletter, a position that was happily handed over to me by the

I recently learned I’ve been use the numbers on my net wrong while chatting with some friends.

last guy who did it. Even this little bit of involvement means I get to read and work with articles by guys who know a hell of a lot more than I do about fishing, I get to see the patterns they might not share with anyone but club members and I get to hear about things like what lake is fishing well right now and which ones aren’t. Plus, club members have started giving presentations have been immediately helpful when it comes to figuring out a hatch or what flies to try when fishing is tough. The really neat thing is that it’s not always advice about fishing itself, but funny little tips about the gear you’re using or advice on how not to break a fishing rod–all very helpful tips, that might have taken years to figure out, assuming I could figure it out on my own.

Perhaps the best time to get involved is when you’re new to an area. Meetings and clubs can be a crash course in everything you need to know about fishing and then some. Don’t limit yourself to just getting involved when you’re new, however. You’ll often be surprised at how much you didn’t know about something–like maybe where the fish are hiding in that lake you hate to fish because you never catch any fish there.

I’ve got a long way to go in my journey as an angler, but not spending all my time on the water and actually meeting and talking to other anglers has certainly helped cut the learning curve down quite a bit.