There’s a lake not too far from me that I fish all the time.

I’ve talked about it before and, despite the fact that, historically, the fishing has been terrible, I keep going back there.

Some days, I really couldn’t help but wonder why I kept going back.

In the beginning, it was because I wasn’t sure where else to go. I mean, I explored other lakes, but this lake was really close. If I wanted to be, I could have a line in the water in less than 20 minutes. It’s closeness made it the perfect spot to make a last minute decision to do a bit of fishing.

For a while, my wife and I would have a picnic dinner ready to go every Friday night and, when she was done work, I’d pick her up with the canoe on the car and we’d just float around on the lake for a few hours and have a great evening on the water.But I never once caught a fish during those outings.

The less than stellar fishing was always offset by the fact that the lake itself was beautiful. It was so nice that I was always in awe of the lake as I approached the water and nearly always stopped to appreciate things before, you know, the lack of fish brought me down.

Now, to be fair to the lake. I would catch fish, mostly in the winter, and I did see decent looking fish in there, so it wasn’t like the fishing was pointless. I landed my first BC fish here (my first ever trout, well, char) and I also managed to hook into my first fish on a fly. It was just a tricky lake to fish. Very tricky. Especially from shore.

And I kept going back.

I’ve never been quite sure what it was the kept me going back there, the beauty and closeness notwithstanding. Eventually, I started joking that the only reason I went to this lake was to practice my casting, which was partially true since not only were there a number of spots that you could cast with ease from shore, but there is also a section that never freezes. This meant that I could keep my casting in decent form all year long without having to worry about being rusty in the spring (or having to mess around with actually catching fish for that matter).

For a while I drifted away from the lake. Other, more productive bodies of water demanded my attention and I would get pulled away, or as happened all too often, I would get sick of the way other people treated the lake (which wasn’t far from a trash can at times) and I would stop going there.

Try as I might, though, the lake has a way of pulling me back in.

At the end of last year, I did something I hadn’t done for a couple of years: I fished the lake from my canoe. Not only did was it great to get back on the water (for being an easy to reach lake, access to the actual water with a boat is a bit of a chore), but I actually got a hit while I was out there.

Just the one. And, of course, it was enough to pique my curiosity once more.

I started thinking about the lake again and formed looose plans to spend a full day there and really take the time to explore the lake–plans that would never really realize themselves, but kept me thinking about it.

Earlier this year, I went out there with my neighbour (I bought a house last fall and, as luck would have it, one of my neighbours loves fly fishing). He told me he fished that lake all the time and always catching fish out there. I almost called him out on it right there and then, but water angler doesn’t tell the odd tale about catching fish.

We planned to go fishing together. He told me where and what method he used for fishing. I did what he suggested and, within a few minutes of being on the water, I had a fish to the boat. In fact, I thorughly outfished him that day.

And, again, I felt the call back to the lake. 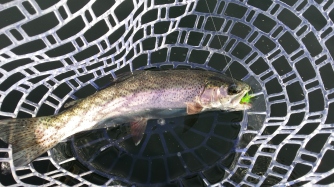 My first fish on a mouse pattern.

Since then, I have gone back there a few times (three times in three weeks, in fact) and I feel as though I could only fish this lake from now until the time the rest of the lakes freeze solid.

You see, all along I felt there was something about this lake I was missing. As I said, I had seen fish in there, some of them were decent looking, and I had even heard a few rumours of some really nice fish coming out of there. No matter how lousy my experience was on any given day, I couldn’t shake the fact that there were fish to be caught and fun to be had.

As it turns out, I was right. There were fish in that lake, I just had to find them and, to do that, I had to put in the hours. I still haven’t found the big fish I’ve heard people talking about, but man oh man am I having fun trying.

Now that I’ve got things figured out, at least somewhat, I’m already making plans for next year. The thought of trying to track the hatches that might happen and, more importantly, the thought of exploring more of the water is almost more than I can handle.

I wish it hadn’t taken me until the end of this year’s fishing season to figure it out, but what can you do?

If nothing else, I heard a great rumour about that lake the other day…

One thought on “Why I Fish Here – My Local Lake”

There was an error retrieving images from Instagram. An attempt will be remade in a few minutes.