Life is funny. One second you’re sitting on the couch enjoying a quiet evening and then, out of the blue, you get a message about a boat.

Now, as an angler and a life-long lover of boats, it’s not that unusual for me to get messages about boat. In fact, it happens fairly regularly. This time, however it was different.

The message was from Joe Cunningham, a boat builder based out of Pincher Creek in Alberta. He wanted, among other things, to meet up with me and go fishing in one of his boats, The Chironomind.

It was the kind of request I couldn’t resist. A chance to get out on the water and the opportunity to try out a new boat. About a week after the message first appeared in my inbox, Joe and I were on our way out to a nearby lake for some fishing.

Anyone who has spent any amount of time on this site knows that I’m a canoe guy. I have been since I started fishing seriously out here in BC. It was mostly a matter of necessity at first. It just so happened that the only boat I had was a canoe. But, after a while, I really grew to love fishing from it. They’re quiet, easy to deal with, great alone or with others and they can get you into places that you can’t easily get to with almost any other kind of boat. It’s not without it’s downsides, though.

The Chironomid, for those who haven’t seen it yet, is a canoe that has been designed and modified specifically for stillwater fishing. It’s got pontoons off the side, which help the boat remain stable, a seat keeps you elevated and a oars for rowing. In a sense, it looked like my ideal boat and I couldn’t wait to fish out of it. 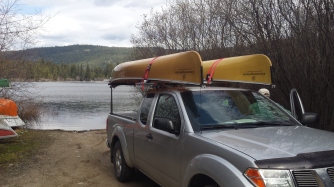 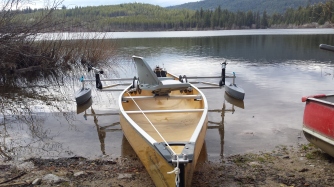 The Chironomid all set up and ready to go. 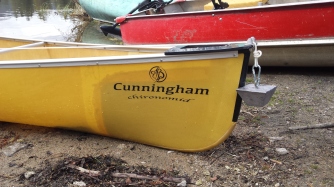 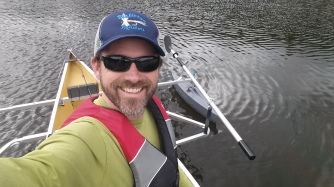 I’m not much of a selfie guy, but I love being able to stand up like this.

When we got to the lake, Joe gave me a quick tutorial on how to set up the Chironomid (it’s actually dead simple) and sent me off to find the fish while he got his boat set up.

The lake we were fishing that day has two moods: it’s either dead or it’s on fire. I wasn’t sure what we were going to get and, every bit as much as I was praying for fire, I was fully expecting to get skunked.

I had my first fish within minutes of getting to my spot.

By the time Joe had gotten out on to the water (maybe 10 minutes later), I had already hooked into four fish and landed three. The rest of the day was excellent.

Every bit as much as I expected, fishing from the Chironomid was a dream. Everything I don’t like about fishing from a canoe–the lack of stability, the pain in my knees–is solved by this. It’s so stable I have more problems standing up in my office chair that I do in this boat. I was actually surprised at how much of a difference this made to the fishing experience. And, although I’ve all but mastered the art of casting from a seated position, the ability to stand up while casting is a real treat. The fact that the boat barely rocks while I’m doing this makes it that much more enjoyable. The anchor system also made life easier. I don’t know if you’ve ever tried to double anchor a canoe, but even with help it’s an unpleasant experience.

I could go on, but I’d only be heaping praise on this boat.

We spent the rest of the day catching fish and testing out the boat (I did, anyway. Joe, being the guy that designed the boat was just enjoying the fishing). It was great to be out on the water with another angler, something that happens too rarely. 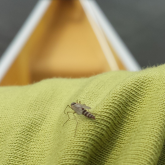 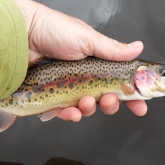 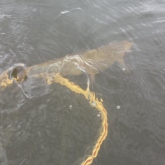 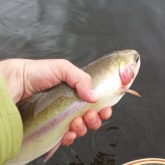 On the ride home, we did what most anglers do: we traded fishing and adventure stories. Joe’s been in the west longer than I have knows a lot more about fishing these waters than I do. I’m pretty sure I learned more from that ride home that I did in the first six months I was obsessed with fishing and did nothing but read about fly fishing (it was winter, I couldn’t fish). He definitely said a few things that had me pouring over my maps almost as soon as I got home thinking about what he had said and trying to figure out how I could apply it locally (I’m pretty sure I have figured it out and I’m already champing at the bit to get out to the spots I have picked out).

Perhaps the best of the outing was, at the end of the day, Joe left one of his boats with me to play with for the summer. To be clear, I did know this was going to happen, but it seemed like such a surreal thing it didn’t sink in until Joe drove away.

So, eagle-eyed readers are going to see the Chironomid in a lot of my pictures over the next little while. There are a handful of lakes around here that I’m dying to try this boat out on.

I have a feeling that it’s going to be a real treat to spend my summer fishing out of the Chironomid.

6 thoughts on “Fishing with Joe from Cunningham Boats”