It’s been a strange summer here.

One of those summers where plans were put in place, routes were mapped out and then everything changed. This happened to me a few times this summer, first when a new boat wandered into my life, then when I signed up for a course for my professional life and again when everything went from flood mode to fire mode.

The unfortunate result was that I barely managed to get out fishing much at all.

The fortunate result was that the fishing I did do was that much better as a result.

Instead of spending my summer chasing bugs up a hill, I turned my attention to the local creek and, when I had an hour or two to kill on some afternoon or another, I wandered off to explore a new section of it.

It wound up being the best way to spend my time on a summer that would have otherwise resulted in no fishing at all.

I’ve never really devoted so much of my time to one little system before. It was an interesting experience to watch it change as the summer moved through its phases from very wet to very dry. One week, the water was almost too high and fast, the next it was barely a trickle.

It presented an interesting challenge because every time I went fishing, the creek was a little bit different. This meant I had to use different tactics, different approaches and different flies to find the fish.

It also meant I learned a ton about fishing moving water, something I always love doing.

It started when I found a spot that looked amazing to fish when I was covering an event for my local paper. From there, I moved downstream looking for more fishing water. I found myself wandering around the base of a mountain, surrounded by steep hills and beautiful trees. My first pass down the creek resulted in a few fish, but they seemed harder to find and weren’t holding in the spots they had been the first time I’d been in the area.

I fished and fished and fished my way downstream and it was almost by accident that I found where the fish were hiding. They had, it seemed, been crowding around the little plunge pools that were formed at the beginning of each run, where the water funneled out of a section of rapids into the next run.

When I finally put two and two together and focused my energy on those spots, it was almost too much fun.

Fish were throwing themselves out of the water almost willy-nilly trying to catch my fly. I’m telling you, you haven’t fished until you’ve seen two fish cross paths mid-air as they both to get your fly. In a perfect world, I’d have photographic evidence of this, but I was having too much fun to stop for a picture.

A few weeks later, I dragged a friend of mine to a different section of the same creek. This time, we hiked down a fairly steep hill (it was actually more like sliding) and found a nice little spot at the bottom of a canyon.

Now, my friend is not a fly fisher, despite my efforts to teach him how, so he was using an old ultra light rod I have with a crappy old reel. A reel that was spooled incorrectly and, unfortunately, didn’t seem like it was going to cooperate. My friend was prepared to have a lousy time, which happens when you’re fishing sometimes, so I wandered off to do a little bit of fishing while he fiddled around with the reel.

When I wandered back, he was all smiles. He had found a little run he could chuck small panther martins into and started catching fish almost immediately.

It was a very cool thing for me to see. My friend, Mark, and I had rediscovered our love of fishing together back in 2010 when I had a chance to get my hands on a boat while living in downtown Toronto. We had gone out a few times together that summer, when he could sneak away from work for a day, and after I moved out west to BC, we continued to meet up as often as possible to fish. In fact, the last time we got together, he soundly out fished me.

But, with all the fishing that we have done over the years, this was the first time I had taken him to a stream like this. Those eager little trout turned his grumpy mood around almost immediately. He found non-stop rainbow action and I had a blast playing with some hard to get brook trout just downstream.

We had a great time until we decided it was getting too late to be in an area with so much bear poop. We called it a day and began the grueling hike back up to the car. 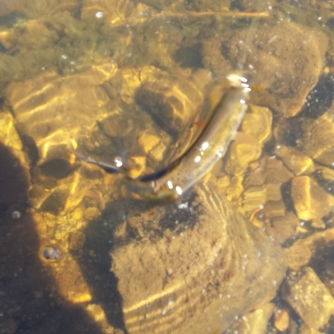 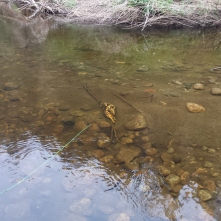 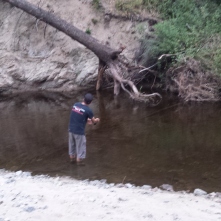 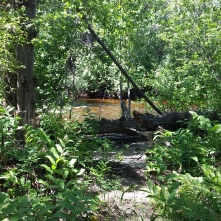 It would have been a pretty grim summer, fishing wise, had it not been for those outings. Not only did they provide with a chance to get out and wet line, but I also was able to catch fish and work on some of the more technical aspects of fly fishing. Small streams often come with very close quarters and everything, from a steep canyon wall to bushes right up to (and over) the water can make casting tricky. Beyond all the eager trout, the added challenge of just getting your fly to the fish can be so incredibly satisfying.

I’m a little odd that way, though.The harder something can be, the more worthwhile it is. Plus, I’m convinced there are bigger fish in those waters. Not huge, by any means, but decent. The kind of fish that surprises you when you hook it and makes you whoop out loud with excitement when you land it.

I may never find that fish in this system, but I’m sure as hell going to have a good time looking for it.

6 thoughts on “Summer of Small Streams”