Exploring, and the activities that go along with it like fishing, is a funny thing. You can plan and plan and plan out your trek to the Nth degree, cover every square inch of the area you’re in with your map book, Google Maps and prior knowledge and still not be fully prepared for what you encounter.

It’s one of the reasons I love it so much.

Not knowing what’s around the next corner or what state the water will be in when you get there adds an element of surprise that isn’t often encountered these days.

You’re forced to think on your feet and decide whether or not you’re going to keep going and adapt to what you’ve found or just give up and go home.

This point was driven home on a recent fishing trip to what is fast becoming my favourite piece of water.

I claimed a day in the middle of a period of time where I’ve been focusing a lot on growing my business to find some fish and help me think about some of the stuff that I have been working on lately. I wanted to stay close to home, so I didn’t have to spend an hour or so on the road before I could even see the water and this creek has been good to me lately. I wanted to continue getting to know it better.

I made my way down the canyon to the riverside and decided that I was going to go downriver first. I had been down there already on my last trek to this spot, but I hadn’t gone quite as far a I had wanted to in order to stay close to the friend that I was fishing with.

The water had changed since the last time I had been down there. It was an interesting mix of more water and less flow. Not sure how that happens, but that’s what I was seeing.

I pushed downriver until I hit the spot I had been looking for — an area where the water plunges deeper into the canyon on it’s way out to the big lake at the valley bottom. From this point down, the river isn’t worth fishing as it picks up too much clay from the plunge and spends the entire year being the colour of chocolate milk. 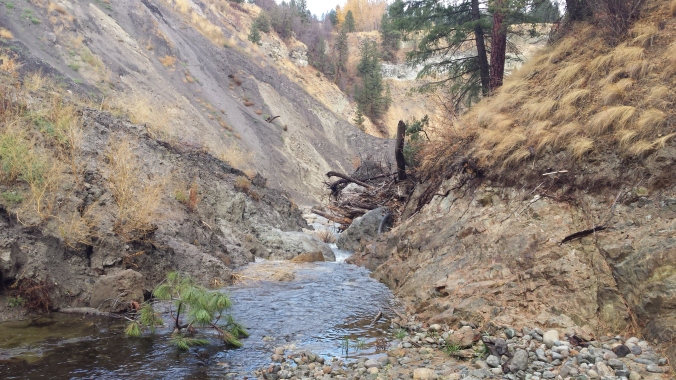 I managed to entice a few little fish to try for my fly in this section, but I kept missing the hookset.

Upriver, is where my adventure really began.

Last time I was down here, I had wandered up river a little bit, but again, since I had company (and it was getting dark and we were seeing a lot of bear poop), I didn’t want to go too far.

This time around, there was nothing to stop me (except the large piles of fairly fresh evidence of bears). I walked and fished my way upstream, hoping to find a few of the holes I’d been eyeballing on the map.

As I moved past the place I turned around last time and rounded a corner, I stopped short at the sight of the biggest logjam I have ever seen. 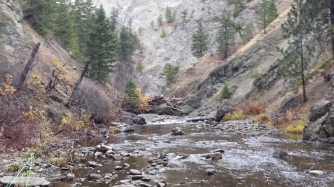 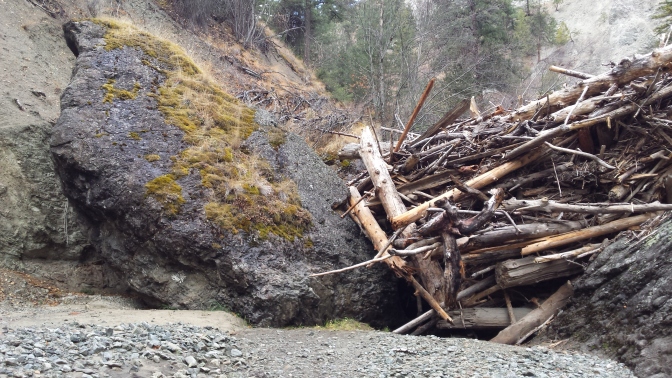 Now, the last time I was up here, I saw a beaver and, it might be tempting to blame the beaver for what I was looking it, but this thing was easily 15 high, if not more, and stretched from one side of the canyon wall to the other (40, 50, 60 feet, maybe).

This wasn’t from a beaver.

I stood there, staring at the wall of wood that blocked my path and decided that, if I wanted to keep fishing, I had to get beyond it. Going around it wasn’t an option. Neither was finding a place to scooch underneath it.

I had not choice, I had to go over it. I found a spot that looked decent and started to climb. I made good progress at first. But then I started slipping. I tried frantically grab at the wood beside me, but every piece I grabbed seemed to shift under my weight. In the three seconds that I was sliding down the face of the rock I was climbing, every possible scenario ran through my head and they all ended with me crushed to death under a mountain of wood.

Luckily, I managed to grab a piece of wood that held and quickly decided that I wasn’t going to make it over this logjam today.

It was a hard realization to come to. In my mind the fish was going to be epic on the other side of that wall, with trout the size of my three year old girl just hanging around by the dozens, waiting to be caught. As a result, I’ve never wanted to know what was on the other side of something more in my life.

It was the perfect time to just sit down by the river and relax for a few minutes.

One of the best things about fishing is the stuff you see. This time around, the riverside was littered with golf balls and, much to my amusement, there was also a golf cart. 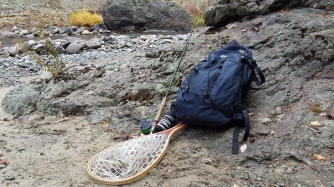 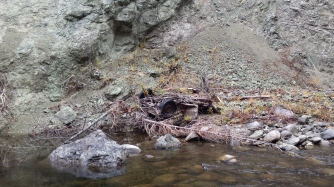 After a little bit of rest, a fly change and a snack, I turned around and made my way back down stream. I hadn’t actually expected to find any fish on the walk back (since I hadn’t seen any on the way up), but I found a pair of what turned out to be decent brook trout hanging out in a pool just downriver from the logjam.

I tempted the trout for a bit, trying a little bit of everything until I found the magic fly (which, of course, was actually the fly I had been using when I hit the pool). I wasn’t quite able to land either of the fish, they kept spitting the hook as I was trying to scoop them into the net, but it was enough to make me feel good about finding them.

The climb back out of the canyon reminded me that I needed to get into better shape for next season. In between the huffing and the puffing, I thought about how I was going to approach my next trek down the canyon. For me, any trip that has me thinking about what I’m going to do differently the next time is a successful trip.

The fish are often just the icing on the cake.

5 thoughts on “The Road Block”