The fishing season is winding down and, as tends to happen, my thoughts are drawn to the year’s fishing.

As I’ve talked about in the past, it was a bit of a funny year. Forest fires, courses, backcountry closures, smoke and everything you can think of made getting out on the water hard.

But, despite all that, it wasn’t a total bust.

All the plans of great hike-in lake adventures and exploring changed in favour of a pair of smaller quests that, ultimately, changed how I felt about a few of the areas I fish quite a bit.

A few pieces of information had dropped into my lap at the beginning of the season that I couldn’t shake. The first, was the presence of larger fish in a stream I fished quite a bit. I had been hearing rumours of these so-called lunkers for a couple of years, but for the first time ever, I had a location to scout.

To be honest, I would have fished this creek a lot over the summer anyway, even if I hadn’t been told where to look for the bigger fish, but having a place to start looking really helped firm up my plans in a summer when things didn’t look good for fishing.

The second was of a species of fish that shouldn’t have been where they were, but, apparently they could be found. Again, just like the tales of bigger fish, I had been familiar with this one, but nothing had ever come from my explorations. But, just like with the first rumour, someone gave me a location to try scouting.

The fishing was exactly like you’d expect. I’d study a map for way longer than I should, come up with a plan, find a little bit of time to get out there and then fish and fish and fish, taking care to cover the water as best I could. I’d usually catch fish, but not quite what I was looking for.

I hadn’t meant to spend so much of my summer looking for these particular fish, but I couldn’t help it. They got into my head and I couldn’t get them out of there.

I’ve always had that problem, though, especially when it comes to fish. Once I get it in my head that I want to get a certain fish, everything else fades away and it’s all I can think of.

When I was a kid, it was Mad Dog catfish, this “giant” catfish that I would see cruising around the marina where we kept our boat in Port Severn, Ontario when I was 5. I spent an entire rainy day standing in one spot, waiting for Mad Dog to appear. Along the way I managed to catch sunfish, rock bass and perch, but Mad Dog continued to elude me. Until someone suggested I lay the worm on the bottom.

I was holding the fish in my hands five minutes later.

I would have been happy to just have done the fishing and continued on with my quest to find the fish I was after, but as it happened, this wound up being one of those years that I was successful.

In mid-fall, after months of chasing around the bigger fish in the small creek, I hit a patch of water that I’d been eyeballing for a long time. Not only was it a perfect day for fishing, but I had the chance to fly fish with my brother, something that doesn’t happen very often at all.

He moved up river to fish higher up on the run and I settled into my spot to fish. Within a couple of casts a beautiful brook trout rose up to sip a dry fly off the surface. After a brief fight, one of the nicest looking brookies I’ve ever seen was in my net. I pulled quite a few nice fish from this run over the course of the next few days and I’m hoping that they will be back again next year. 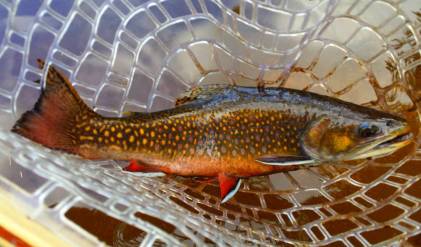 The ultimate moment, however, came earlier in the season.

I was working a stretch of water in a river not too far from home. I’ve been fishing this river since just before I started fly fishing (in fact, I didn’t start catching fish here until I started fly fishing), but this particular run was one that I had only discovered the year before.

I was fishing away, catching all the usual little fish I was used to. I was having fun, as usual.

After a while, I caught a particularly small little fish. Probably four to five inches long. As I was removing the fly from its mouth, I noticed a bright slash of colour on the underside. For one moment, I thought it was blood (I was fishing after all), but then I noticed a second bright orange slash on the other side.

It was my first cutthroat trout.

I made an attempt to get a picture, but the fish decided he wanted to remain a secret and flopped back into the water before I could get a shot. I howled and wailed as the fish disappeared back into the water, then laughed. Of course I would miss getting proof of something I’d been looking for for such a long time.

These rumours– of bigger fish, of fish that shouldn’t be there, of beautiful spots and things that call to our hearts–are the things that fuel anglers. They drive us to the most remote corners of the world and keep us close to home in our own backyards. They spread at tying nights, around the campfire and, best of all, on the banks of the river.

Without these rumours, most of us would still fish, of that I’m certain, but the allure of the unknown and the desire to see it for ourselves is a force that will drive anglers to anywhere that water flows.

There was an error retrieving images from Instagram. An attempt will be remade in a few minutes.