When I was about 12 years old, my best friend’s dad bought a house on the opposite end of the island we were living on at the time. When I asked him why his dad had bought the place–they already had three places that I knew about–he told me that the creek that ran through the land had really good brook trout fishing.

At the time, it was about the craziest thing I could think of. Why on earth would anybody buy land just for the fishing? I mean, we lived on a island that was filled with lakes and, more importantly, on one of the Great Lakes. In other words, there was no shortage of fishing opportunities. Heck, back then, I could have the time of my life casting right off the dock right outside my house.

Plus, I never really associated his dad with fishing. He was a lawyer and, like a lot of dads at the time, always seemed to be doing something. He also hunted, which was as close to fishing as I would have expected him to get.

But he did fish. In fact, he was a fly fisher. Growing up, he was one of the two people I knew who fly fished (the other was an uncle of mine who lives in South Africa). I tied my very first fly on his vise. It wasn’t a pretty tie. His advice was to try and create something that looks like something you’d find in nature, but I just grabbed a few feathers and tied them on a hook. I’m fairly certain that I still have it somewhere, although by now I’m sure it’s nothing more than some feather dust and a hook.

Now that I’m older and I’ve taken up fly fishing, I totally get it.

I mean, I really get it. Off the top of my head, I can think of at least three different pieces of property I want because of the fishing. One is on a really nice stretch of my favourite little stream (the section of stream that just happens to have the biggest trout I’ve seen on this creek). The others are just a peaceful spots that not only have great fishing, my daughter really enjoys them. 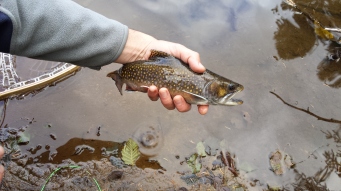 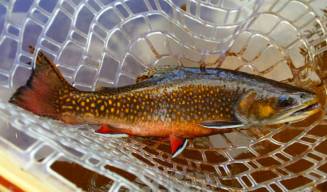 A pair of brook trout from one of the places I have my eye on.

The thought of having a little stretch of water that, in a sense, is only accessible by you and those you trust (because when you’re sharing your fishing spots, it’s always about trusting the person you’re sharing with) is an exciting one.

It’s partially a matter of being close to the action. Even though I can be fishing decent water in 20 minutes, including drive time, the thought of being able to just walk out my front door and do some fishing is a great one. I miss being able to do that.

It’s also partially about having a little spot of water all to yourself. This was especially important back when my friend’s dad bought his land because every square inch of that island was private property (not counting any park land). In order to get access, you either had to know the person who owned the land or, well, you had to own the land yourself. Here in BC, there’s crown land and water access everywhere (although access can and does get cut off all the time).

For me, though, it’s mostly about really connecting to a piece of water. Being able to watch it grow and develop over time, see the ups, the downs and really getting to know the fish in that stretch of water is exciting. Every time I see a post from someone describing a bit of water that they’ve been fishing for years and they start talking about how the river has changed, I get excited.

Rivers change a lot from year to year. I see that on the few rivers and streams that I’ve fished with any kind of regularity over the last couple of years. Being able to track that change and see how the runs differ from season to season, and whether or not the pools remain good that whole time, is fascinating to me.

Plus, you have the opportunity to get to know the fish based on the funny little differences that make it possible to tell them apart (like scars, particular spot patters or even favourite hiding spots).

All I can do now is dream and fish the spots that are close to me, but one day, I hope to get my hands on that little bit of a dream: a piece of water that is, for all intents and purposes, my own little fishy heaven.