I have been in need of an anchor lately.

It was something that I hadn’t really realized until I read this post by my buddy Walt over at Rivertop Rambles, but as soon as I started I realized that’s what I had been experiencing.

Winter does that to anglers. The game changes, the fishing changes, everything changes. Fishing experiences, at least around here, become little more than wading through snow up to your knees to fish water that comes up to your ankles, or staring at a hole in the ice. 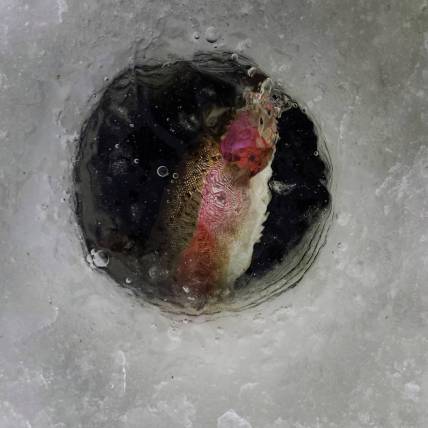 Don’t get me wrong, both of these experiences can be both exciting and rewarding, but it’s just not the same. Being able to cast properly and watch as your fly drifts down the run is replaced by trying to keep your line away from sharp chunk of ice and the realization that you haven’t been following human tracks, it was actually moose (which explains why this guy seemed to be wandering all over the woods instead of moving through the snow in a straight line).

This, when combined with the fact that the weather is often quite gross and that the time between outings is usually at its longest means that anglers often come untethered and we drift along, until something catches us and holds us still for a little while.

A little over a week ago, I was drifting aimlessly along through my days. I was grumpier than normal and, I knew from past experience that meant I needed to get out and do some fishing. Not only had been a while, but I had picked up some new gear since the last time I was out and I was dying to test it out.

A tentative plan formed in my mind and I aimed to be out fishing that weekend. Almost before I had a chance to really think about what I was going to do, a text came through on my phone, “Want to hit the river this weekend?”

It was my friend Chad and the timing was perfect. We’ve fished this river about this time for the last few years and this year we were determined to finally find the fish.

The night before wasn’t great. My daughter woke up around midnight and it was sometime around 2 when I was finally able to get her back to sleep. As I lay there, awake, thinking about the next day, I heard a sound that all anglers dread: the howl of a wind that could easily ruin a day of fishing.

Eventually, morning came. I was tired, it was windy, it was raining and I could not have cared less. I was going fishing!

We got down to the first spot we wanted to try and suited up. We had seen a couple of other guys a bit farther up river and, not wanting to crowd them out, we started lower down.

We fished for a bit without success. From what I could see, Chad and I seemed to be spending more time fiddling around with flies and leaders than actually fishing. The wind made casting difficult and by the end of the day I had to completely change my leader at least four times. But we were fishing and that was all that mattered.

When the runs upstream opened up, we slowly started to move up. The wind wasn’t as bad up there and that, thankfully, made casting so much easier. I was able to really test out the new line that I had picked up (a Scientific Anglers Mastery MPX line) and I even started to find my groove with it.

As we stood there in the water, freezing from the wind, rain, snow and the cold water, it began to seem as though the only thing we were going to be doing that day was practicing our casting, which is usually as good as it gets for winter fishing. I  felt better just being on the water and I could feel my lack of direction slowly go away.

At the end of a particularly long drift, I lifted up my rod and prepared to cast back up stream. I felt the kind of resistance that could only mean I’d found bottom. “Well, at least I found my anchor,” I thought to myself. I uttered a few choice phrases and pulled on my line again.

That’s when I felt the wiggle.

I’d love to be able to tell you that what followed was the kind of fight that people write books about, but this was middle of winter in a cold day. The fish, a carp as it turned out, barely put any effort into the fight. But I could tell that, if it had wanted to, I’d still be fighting that fish today. As it was, it sat there about a rod’s length away from me for a good five minutes and nothing I tried could bring it closer.

After a couple of quick pictures, I sent the fish on its way. One of the guys who had been on the water before us came up to chat and, as it happened, we knew each other from the local tying nights.

We chatted for a bit, swapped tactics and stories, and went back to fishing.

No other fish were caught that day (by any of us), but I’m not going to complain. In the middle of that awful weather, with snow blowing at us sideways, I had found my anchor in a net basket full of gold and a face that only a mother could love.

6 thoughts on “In Need of an Anchor”